I had a rare treat last Wednesday, the privilege of driving back into Denali National Park on a private bus, back into the depths of a wonderland of animal, plant and geological diversity that has few rivals on earth.

The park is the size of the state of Massachusetts. The only road goes a mere 94 miles in, but a wild and winding, cliff-hanging dirt road, passing Denali, and ending finally on the banks of Moose Creek. Closed to the public unless they have a special pass, one must take a bus to avoid harassing wildlife, who conducts their daily activities within full view of passers-by since they are not hunted or chased.

We saw 2 sow grizzlies and their twins foraging for vegetation and voles, a lynx, moose, caribou, a golden eagle, beaver, an assortment of ducks and raptors. All under a vivid blue sky with the towering white hump of “The Great One,” more aptly named by the indigenous peoples here than a US President, McKinley, who had never stepped foot in Alaska.

I was privileged to have worked as the wrangler at the end of the road at a remote lodge that offered horseback tours into the Kantishna Hills, a mere 20 miles from the north face of Denali, years ago. For 5 summers I took small groups of adventurers up a creek and into the hills, where no one else ever went. We often passed grizzly tracks and a few munching off the trail, my heart pounding but keeping a steady pace with my guests behind me. My favorite part was climbing out of valley with a fast moving creek, moving steadily up past treeline and into the alpine tundra, while Denali peeked from behind another hill and then came into full view, filling my field of vision with the enormity of the highest mountain in North America, and the tallest mountain in the world from base to top. I entered a cathedral of such grand proportions anything man-made was totally insignificant by comparison. 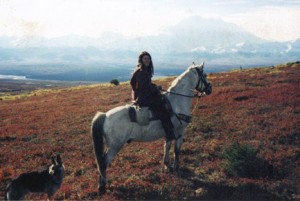 The horses stretched out as we climbed higher, my hands in their mane,
my entire body alive and connected. I loved sharing this sacred place. At the top the horses would rest and we’d eat lunch in the tundra, small plants entwined in an ecological dance of harmony: berries, flowers, grasses, mosses, lichens, dwarfed trees, with the north face of Denali facing ours.