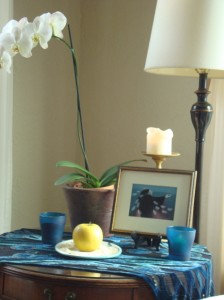 “…here is the deepest secret nobody knows (here is the root of the root and the bud of the bud and the sky of the sky of a tree called life; which grows higher than the soul can hope or mind can hide) and this is the wonder that’s keeping the stars apart
i carry your heart (i carry it in my heart)”
— e.e. cummings

Today is All Saint’s Day.Tomorrow is All Soul’s Day. It is also a Full Moon, cycle of completion and fruition.

I woke last night to a bright light in my face, Grandmother Moon.It was All Hallow’s Eve, the night the veil is lifted between this world and the next.My Dead Loved Ones were closer and we whispered through the night, delighted to be together, consoling one another that on this side we’re doing OK, and on that side we’re doing OK.I’ll see you again some day, I’ll see you again some day.

I went outside in the deep fog and said prayers with Grandmother Moon.I greeted my recently departed and asked they take special care of some friends who just got there, and others who will be arriving soon.They will.The air was damp and cool in the night. My dog was by my side, wagging her tail, and I cried because I don’t want to say goodbye to her, someday soon.

This edge between the living and the dead is razor sharp.Life without our Loved One is living with a carved out space in our hearts that nothing can fill in.It feels like falling, like in those dreams where you are falling – but you don’t wake up and you keep on falling.It feels like nothing can help or save you and that you will never again find peace in your heart. My slim advice: cry and remember your Love to whomever will listen, as long as you need to do that. It will soften and shift.

It is a sharp edge also because of our own terror of our own death, of saying goodbye to family, kisses, strawberries, butterflies, babies, wind, water, dogs.We are afraid, most of us.And these days, because we are so separated from Mother Earth and our place in all things, because we have tangled and reduced our connections, we feel even more lost.

It will be OK.It will all work out, on both sides.

Remembering and honoring our Dead weaves new connections between the worlds, and roots us deeper to The Mother.When it is our time to die and to leave – and we will, like it or not – we may die in terror or in another more peaceful way. I pray we each die with a sense of connection to this side and to the next.

What helps me stand at the sharpest edge:

Paul Hawken (of Smith & Hawken) explained in his book Natural Capitalism that in order to achieve sustainability, the result of one process had to be ‘food’ for another process. Further, if you take something from the land, you don’t return it as waste, but rather something usable by Nature. If you’ve rendered unusable, then you remake it, reuse it or give it to someone else who can.

When I lived in Alaska, no one hauled away our waste. Every single item we hauled on to the property or grew there, had to be consumed, reused, recycle or returned (to the land). We got it down so that our family of 4 generated one small bag of trash per week. It was a huge lesson about being mindful of, and responsible for, each material decision we made. The goal: low impact.

Sustainability — low impact lifestyle, carbon footprint, carbon offsets, permaculture — what we’re talking about here is conscious, responsible living. It’s more than a good idea. Where do you start? While Natural Capitalism focuses on businesses and business processes, Living Green focuses on the principles of sustainability in everyday living. You can get them both at Amazon.

In February, before I said final goodbyes to my partner and my daughter, I bought a packet of heirloom tomato seeds. They didn’t have a name, but promised to have loads of beta carotene that held up under canning. Extra vitamins in the long dark months of winter in the Pacific Northwest.

My little seeds grew to tiny plants in the dining room. They grew as my attachment to the man I had hoped to marry broke and I began the long season of missing him without reaching to him. I sat on the floor and watched the wee plants unfold, thinking of a happier summer ahead.

In April, strong enough for a short journey, I gave 10 away, transplanted 20 into pots filled with the soil mixture recommended in
All New Square Foot Gardening

, and set them on the front patio to grow.

They looked small and cold, buffeted by the Northwest marine breezes. So I covered them with pint canning jars -the same ones, turns out, I canned them in five months later.

I got the guest room ready. My daughter was coming in early June after her last hectic days of college. It would be our final summer ‘just us, like it always was.’ She, off to England to her vocation and her man there. Me, proud of her accomplishments and honored that she would spend a final summer with me.

At the feed and garden store, I tried not to compare my frail starts to the tough and burly adolescents for sale there. I hovered over mine, eventually changing the pint jars to quart ones – a good sign. Suddenly, in June, they took off, tough and strong.

My daughter arrived thin and weary and our summer began. In this glory place of water, mountains, osprey, eagles, horsetail, cedar, salt and wind, I cooked for her, while she longed for the partner she would soon be with.  She tended to me, who would not be with mine. She cried easily. I cried easily. We knitted and read and talked. We watched seven seasons of All Creatures Great and Small: The Complete Collection

. We did not sleep well.

Out front, looking east to Mt. Pilchuck, nineteen tomatoes grew strong. One stayed small and frail, trembling in the warm breezes. That one, I spent extra time chatting up, based on a study that they grow better if talked to by a woman. By July, I was glad there was no man to contend with. I wanted them all for us.

They grew and flowered and thirsted. My daughter tended them, too, watering deeply and well morning and afternoon. In July, she counted 92 tomatoes on the largest plant. The smallest, my avid listener, had produced one. Hurray for her!

And then the tomatoes ripened the way popcorn pops: slowly, then faster, then in an explosive rush. The first one we picked reverently, with gratitude to The Mother. We praised it, sliced it in half holding our breath, then breathed in the juicy scent of coral-red. It tasted like sun, like our island, salty and loamy.

My little seeds grew to lusty mothers, who spilled their bounty and shared easily. When the fruit was red and ripe, they let go.

It was not so easy for me, but I prayed each day for the will to release my child gracefully. She got stronger and calmer. I let go of my man some more. We finished up our knitting, and she left for good.

She left before the time to put them by, before the height of the harvest.  I picked them by myself. She lives now in her heart’s home, far away across the sea, and I live in mine, here, facing east to the Cascades, alone and content.

When next we meet, I’ll take her a jar of salsa, and she can share our summer tomatoes with her man, and remember our tending that brings nourishment in the long stretch of winter ahead.

I asked Mottle, the dainty little, mostly-feral tortoise shell cat that has lived in my backyard jungle for 7 years now, if I could write about her.  She agreed — but only if I didn’t divulge her true location on any given day.  She prides herself in being illusive.

Mottle came to live in my compost when she was young and so skinny that she disappeared when she turned sideways.  She loved the compost (it was warm) but was hanging out with a new boyfriend (an unsavory looking fellow) and wouldn’t be lured into shelter until she was full of kittens and autumn was on its way.

I named Mottle after a cat in Timothy Findley’s book Not Wanted On the Voyage which is a dark comedy and fascinating retelling of the old story of Noah and the arc.  In that story, Noah is portrayed as a quintessential patriarch.  His wife, who has no other name but Mrs. Noyes, has a cat named Mottle and both of them can only just barely tolerate the old man (he’s mean).  In preparation for the voyage, Mrs. Noyes brews gin, bottles it in quart jars and hides it in the rafters of the arc.  Once the rain begins and the voyage is underway, Mrs. Noyes and Mottle sneak down to the animal deck each night,  crack open a jar of gin and spend the evening teaching the sheep to sing. I loved that.

So when I told Mottle how she got her name, she chuckled and murmured under her breath as she strutted by on the way to the raspberry patch….”I love to sing!”